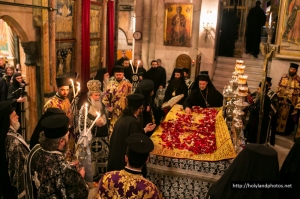 The “epitaphios” is the shroud in which Jesus of Nazareth was buried in Jerusalem. In accordance with the Jewish Laws and regulations of Judaism in the Ist century. I am frequently asked which Church has buried Jesus Christ. This is not a joke. People do not kid when they ask this. They can be in trouble because they understand they are at a very special place. They may not even get to the fact that it is the Holy Sepulcher and the place where one of the most important events in the history or the consciousness of humankind has occurred. They are both anxious, a bit lost by the place ,the noise, the atmosphere. All cry, yell, pray, chant to God their voices mix up together, but they are disassembled, as scattered in a tiny piece of land and a building that is not very large. It is not “ancient, primitive”, Early Church”; it is a mixture of Ottoman, British Empire, Latin and Crusader features, a bit a mishmash “briques et de broques” the French would say.
There is now a wall that has been built opposite thet front gate in order to stop the pilgrims and visitors to enter and disturb the Orthodox services during the day and at some feast. It also aims at stopping the doves to fly into the bige nave and over the altar… we use to receive unusual gifts from high…. Not that much these days because of the micro-protections .
The wall shows the funeral of Jesus. It is as recorded by the St. James Gospel, i.e. there are many things, not only details that show the distance taken toward Judaism. And even the account of the burial as described in the Gospel. But Jesus has been wrapped into a shroud after having been perfumed and washed, protected with balms, embalmed. Only men were allowed as for today to perform this rite.
The epitaphios/επιταφιος became the cover that was put on the major cathedrals especially in the churches of the East, as Saint Sophia at Constantinople. Some theologians consider that the epitaphios was a simple cover on the altar with the “imprint of Jesus” introduced in the Church rather lately (ca. 14th c. maybe earlier) and that afterwards developed in the East as a major symbolic “linen” that “pictured” the Body of Christ called to resurrection as celebrated during the Divine Liturgy and at all Services. First, a corporal, then the sign of belonging to a jurisdiction, under the omophoron of a bishop who leads a canonical Church. At the present, an Orthodox priest must have a “shroud, epitaphios called antimins” to serve the Divine Liturgy, though the Christians of the East used, in case of emergency, to celebrate on an open Gospel. The rite as performed in Jerusalem is very moving and the flowers are distributed to the faithful as they will be cast on them on Sunday afternoon on the way to the Holy Sepulcher and the reading of the Gospel of the resurrection in many tongues.
(c) Ioannis, Holylandphotos

Archpriest of the patriarchate of Jerusalem in charge of the Orthodox faithful in Israeli society. Professor of Linguistics, Yiddish, Talmud, Comparative Liturgy between Christianity and Judaism, Churches of the East. View all posts by Av Alexander A. Winogradsky Frenkel